The Secrets Behind Dropshipping Success In 2022 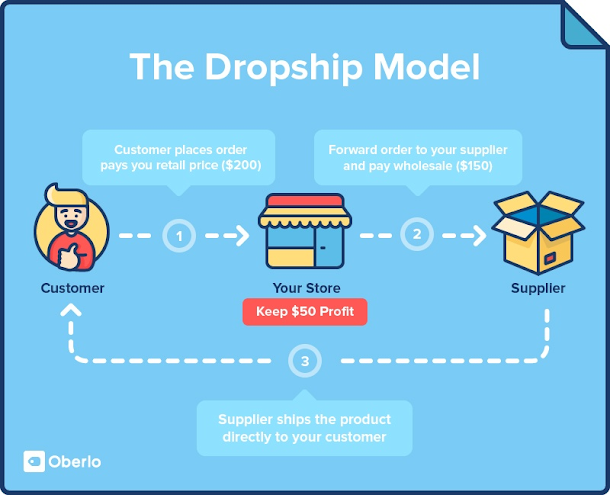 Like MOST beginner entrepreneurs, I was instantly flooded with heaps of content - 'Start making money today,' 'Do this to get rich,' 'The best business model for overnight success,' and the list goes on.

But in my early days, there was one that stood out like a sore thumb, one business model, which now that I think about, has lots of mixed opinions.

If you read my first blog, you would know that this business model is none other than the infamous 'dropshipping' business model.

For those who are unfamiliar (which is highly unlikely), dropshipping is essentially this:

(You can learn more about this business model in my Dropshipping VS FBA video)
Although this sounds VERY simple, this is the exact strategy that every single 'guru' in the dropshipping space will throw your way.
In essence, the business model is actually that simple - but it's not EASY.
After my discovery of dropshipping, a few days past and my oldest sister sent me a message introducing me to the platform, 'Shopify.'
This is when I decided to say f*** it, and go all out on building my very first business. 'Flexiposture' was born.
Flexiposture was a back stretcher product that helped people very easily and quickly relieve back pains. At this point, I was completely sold on the idea that I can build a business that makes me hundreds of thousands in income within the next few months, all I had to do was put in the work at the start.

So I set out, creating my logo, the website, social media accounts, and started searching Alibaba and Aliexpress extensively, reaching out to many Chinese suppliers who manufactured this product.
This is where I hit the first brick wall, actually more like brick walls. The first big problem was that most of these Chinese suppliers were unable to communicate effectively in English. This led to many missed opportunities, and time being spent ineffectively communicating back and forth to no avail.

After a few weeks, I had finally found a supplier that I can trust and negotiate with. I had found my long-term business partner and we were ready to build the next big thing together.

Now, this is where the second problem immediately arose. See, in today's day and age where things such as Amazon's next day delivery and platforms such as TikTok, it's very hard to maintain people's attention because everything is expected instantly, We're in an era where instant gratification is all we know.
In fact, there's a study that was done which indicated that humans have lower attention spans than fish... Yes, fish.
So once I realised that these products I'm going to be selling will take at least 30 days to reach my customers, I started to panic. I scoured YouTube and Google for answers but the only solutions that were available were solutions for when you've scaled your store which involved bulk buying products and storing them in fulfillment centers.
"I don't have money for this! The only reason I'm starting this is because I thought I don't need money to invest!"
After a few days of stress and ongoing mental warfare, I decided to say "screw it" and carry on with the business because I had a vision for something amazing.
After another few weeks or so of constant editing and tweaking of the sites, description, etc, I decided to purchase the domain: Flexiposture.com.
This is when Shopify had a 90 day free trial plan and so I was pretty good for time, I didn't need to buy a membership anytime soon and so I was taking a long time to make sure everything was perfect for my first visitors to the site.
After the domain, it took me another week or two to set up the Facebook business manager, get my ad account ready and I started to create my first ad campaign.
My third problem started to materialize, I didn't know how to market! I knew nothing of Facebook ads and the only source of information I had was YouTube. So I spent the next few days to a week learning and 'mastering' the craft of advertising online.
I had heard that video ads convert the best and so I set off to Fiverr to find a video ad creator - a few conversations and days later, I had my very own video ad!

"I'm going to be filthy RICH!"
"Are you kidding me, why did I even go to school if I'm about to make every teacher's salary combined after a few months of work?!"
I could already see the finish line, I was so close, all that was in the way of me and my newfound dreams were the two buttons: The 'launch store' button and the 'publish campaign' button.

Two buttons and I was about to become 'The 17-year-old prodigy who earns £300,000 a year from home after leaving school.'
I could see nothing but upside, nothing but the luxury I was about to indulge in.
However, it took me a few more days to finally build up the courage to press those buttons and make my dreams come true.
The store was live, the campaign was running and it was just a matter of time before those PayPal notifications started flooding in like hungry zombies.
I was so ready for the influx of cash to roll in, that that same night, I had a dream that I made over £300,000 that day from these back stretchers.

I woke up and immediately turned on my phone to admire those notifications and...
Nothing.
Not a single notification. Just crickets.
I ran down to my laptop and took a look at the performance of the ads, and the traffic to the site.
The ad had thousands of views but barely any clicks, never mind conversions.
Immediately my mood changed, I started feeling let down, like I was a failure. "How could it not have worked?"
"I spent £11 on ads and nothing?!?!?"
Keep in mind, I have never had a job or earned money prior to this. As mentioned in my previous blog, I was the shyest kid ever. £11 was an enormous amount of money and it all went to waste!
There were a few days left in my Shopify trial and so I made the hard choice to cut the ads, take down my site and hang up the boots.
The dreams I envisioned were not in the slightest achieved. I went from a high achiever, getting A's and B's in school, to being the biggest failure in online business.

I wasn't as special as I thought. Time to go back to what I knew best; video games.
Weeks later, I'm scrolling through Instagram and see the back stretchers being advertised and the company making lots of profit. That could have been me...
There was a lot of lessons densely packed in this blog post:
What did you learn from this? Leave a comment explaining below.

November 16, 2021
How To Write The Ultimate 1-page Business Plan To Go From 0 to $1 million I remember when I started Condensr , my very first tech company. It was drastically different than anything else I've ever tried. Before that, I've done things like dropshipping and e-commerce , I tried forex , and I tried running a marketing agency . Those things require a lot less research than something like a tech-based company . They're simple, replicable businesses (generally). However, Condensr was different. I spoke to a bunch of people about it and was worried people will steal my idea - it never really happened. Tracing back, I remember a common trend taking place when I spoke to people about the business. "Do you have a business plan" they'd all tell me. "no...?" I answered back confused. "I have a pitch deck ..." A business plan is a 30-100 page document that outlines everything your business is going to do over its lifetime to accomplish its goals . It
Post a Comment
Read more