Ego Is The Enemy: How To Win In Life & Business 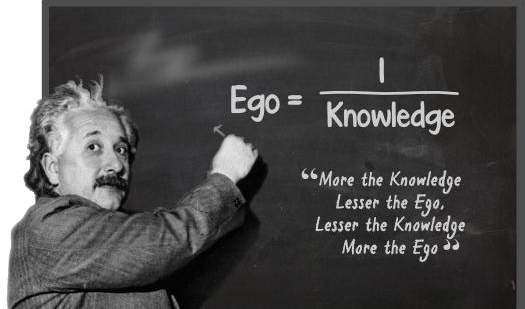 I stared down at the paper, shocked as to how this could even be.
I've never done this bad in anything in my life. This was my first real realisation that I am not untouchable.
I had somehow managed to fail my mathematics test during A-levels (college for Americans and others).
In high school, I was always the kid getting insanely high results. Worst of all, it didn't take me days on end of revision, it didn't take me hours and hours of memorisation, it just came to me in the moment.

Annoyingly, all I spent my time doing was playing video games nonstop.
It wasn't like I would never stress or worry about the exams, but I always used my ego and acted like I've got this in the bag to hide the reality I was facing in my mind.
I was terrified to enter those exam halls, I was terrified of the sudden swoop of loneliness that hit me as soon as that timer for the test started.
Once the clock started to tick, it was every man for themselves. Writing away like their lives depended on it.
Now that I say that, lots of people's lives really did. Those were the grades that will get them into those top universities and get them into the top jobs.

After exams, everyone would ask "how did you do?" And my response was always along the lines of "That was nothing!"
All along, I was shivering inside because I  felt I had no purpose - I wasn't doing those tests for the same reason as everyone else. I was doing them to conform.

But for some reason, my fear was almost always relieved by the results that we received a few weeks after the exams.
And that's when my ego skyrocketed once again.
However, as soon as A-levels came around, it was a completely different ball game that I was frankly not ready to play.

The world had finally told me that what you've been through so far is a mere introduction to what life is about to throw at you.
Punch after punch I took until I finally decided to find a job.
Yes... find a job.
The 'almighty Mohamad' had finally swallowed his pride and decided to work for the man.
And to be honest, it was nowhere near what I thought it would be like. It was WORSE!
My first job was a commission-only, door-to-door salesperson job. We were out in the streets, knocking on doors every day in order to sell some broadband.
On the bright side, I had recently watched The Wolf Of Wallstreet, and every day as we enter the office before we venture out into unknown territory, we would get a speech like we're marching into war.
It felt like living in the scenes where Jordan Belfort was giving the talk to his agents.
It gave me a sudden boost of energy, but this energy was instantly faced by a slammed door as soon as we went boots on the ground.
It was the most demoralising job to ever do. I was not a salesperson, nor did my personality even remotely match that of a salesperson.
I had to fake being the overexcited, animated salesperson, but every rejection fed back into my anger towards the world.
I couldn't take it, I wasn't cut out for this.
What's worse is that every day it would rain, it was cold and we had to travel at least an hour away from London after we've reached the office that was already half an hour away from my house. To me, we really were in unknown territories.
Every day on the bus, I would go to the back, sit down, play some songs on the way to work and tears would roll down my face - "Is this really what life has come to?" "Is this really what the world had in store for me?"
All I wanted was to go home and sleep. Waking up slowly started to become a problem because facing the challenges of that day was the last thing I ever wanted to do.

One day, on the way to this hellhole, I was crossing the road and the first car waiting at the traffic light was my dream car; a Lamborghini Urus. Shortly after, whilst knocking on doors and getting rejected endlessly, I remembered something, I remembered our manager mentioning a book called 'Who Moved My Cheese?'

So I went and sat in the nearest park, downloaded my Audible app, and got the book with my free credit. I started listening to it whilst watching parents and families laughing and smiling together.

The answer was right there in front of me. There is no problem with the world. I was the problem, all along, I felt like the world had it out for me.
I was the one who was constantly in my own head, angry with the hand I was dealt. But every singular action you take comes back around full circle and my life at that moment was the product of my earlier actions.
My ego had led me down a dark hole that only I could escape from and it was time to do so.
"Who Moved My Cheese?" showed me that I'm either going to spend my time being angry and waiting for things to go back to how they used to be, or I was going to adapt to the way life is and change the position I'm in... cheeseless.

The next day, I turned in my resignation letter, and off I was to the next step of my journey.
Although I didn't find success working for others, I had managed to pick up some very valuable lessons along the way. One being that working an average job is not something I wanted to do.
Within this time-period, I managed to make a grand total of 1 sale. That is £50 collected. Altohugh it was somewhat satisfying, it made realise that it's nowhere near enough.
It's important to experience something to quickly assess if it's something you enjoy or are good at.

The other big lesson I learnt is that I am not invincible, I am not untouchable. I just had it very easy.
I learnt that I will either have to change or I will be stuck in this very position I'm currently in, lost and confused.

The final lesson that is important to mention is I realised that I didn't want to be alone.
The one thing I've always fought hard to achieve - being left alone - was actually the one thing I despised.
Everything I'm doing is more for people around me, than for myself.
I could have never learnt all of this stuck in my old ways.
Constant change, and open-mindedness leaves you vulnerable to betterment.
Embrace it.